Tennessee's defense has been lights out in recent weeks, keeping the last four Titans games under the total 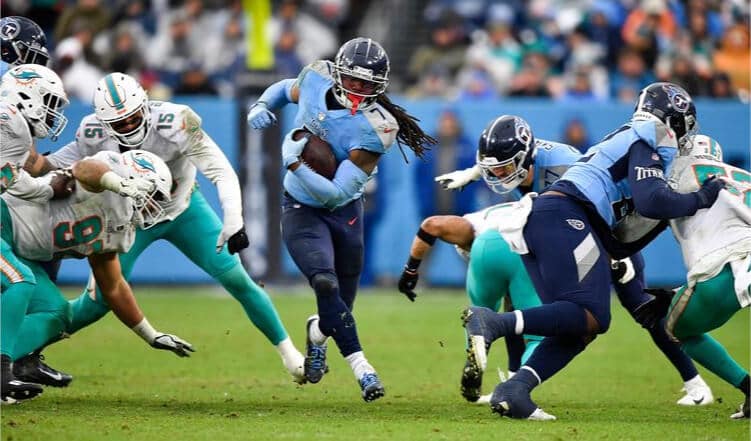 Turn on sports radio, ESPN, or any NFL podcast, and you’re almost guaranteed to hear doubts about the Tennessee Titans.

Some analysts and pundits have called the Titans — who will earn the No. 1 seed in the AFC with a win over the Houston Texans Sunday — the worst potential No. 1 seed in the history of the NFL. Football Outsiders’ DVOA metric, which measures a team’s efficiency, agrees with those doubting the Titans’ credentials.

New DVOA analysis. It turns out the Titans would currently have the worst DVOA ever not just for a 1 seed but also for a 2 seed! But they probably won't if they beat Houston on Sunday. And yes, that doesn't account for all the injuries. There have been a lot of them! https://t.co/eL2HfE2vS4

Titans supporters hearing these disparaging comments quickly chime in, mentioning the significant number of injuries that affected the team this regular season. Just looking at the offense’s skill players, it’s clear the Titans were rarely at full strength. Running back Derrick Henry only played in the team’s first eight games, and wide receivers Julio Jones and A.J. Brown both missed at least four games.

Defensively, Bud Dupree, Rashaan Evans, and David Long Jr. all missed meaningful time due to injury. Fortunately for Tennessee, several of their stars on both sides of the ball appear healthy with the postseason looming. Henry was activated off injured reserve this week, which could mean he makes a noticeable impact in the postseason.

The lazy narrative that the Titans are the "worst #1 seed since" shows how little many truly know about this team, what they've gone thru, what they're made of and what they still can be.

So are the Titans as “bad” as the analytics suggest or are they a legitimate Super Bowl contender flying under the radar as the regular season nears its conclusion? Expect the argument to rage on for at least another couple weeks, until the play on the field finally settles the debate.

Win and rest for a Super Bowl run

A win Sunday over the Texans gives the Titans the top seed, which also means the Titans receive a bye for the first round of the playoffs. For a team with injury troubles, the extra rest sounds like a tremendous benefit.

Fortunately for Tennessee, it’s a heavy favorite to win Sunday. The Titans are 10-point favorites at Caesars, DraftKings, FanDuel, TwinSpires, and WynnBET. BetMGM goes a tad higher, listing the Titans as 10.5-point favorites in the divisional matchup.

As for the moneyline, it hovers around -500 at most Tennessee sportsbooks. DraftKings goes as low as -475, while TwinSpires goes up to -530.

If you’re a Titans fan feeling bullish on your team’s future, the Titans still hold fairly long odds to win the Super Bowl. BetMGM, DraftKings, and FanDuel list Tennessee at +1200, putting them toward the middle of playoff teams in likelihood to win it all despite the team’s likely playoff bye. The team’s Super Bowl odds are yet another indicator that the Titans aren’t viewed as an elite team, even though their record suggests otherwise.

Fifth under in a row?

Each of Tennessee’s last four games have gone under the total, and the previous meeting between these two teams — a 22-13 Texans win — went under the total of 45. Expect a similar total this weekend.

DraftKings, TwinSpires, and WynnBET list the total at 42.5 points, while BetMGM, Caesars, and FanDuel have it at 43. Tennessee’s defense has been elite the last four contests, limiting opponents to just 9.8 points per game. In the team’s eight games since the start of November, only one opponent has scored more than 24 points.

Houston’s offense isn’t exactly a juggernaut, as it has been shut out twice this season. The Texans have shown some flashes of improved offense in the last three weeks, however, with a 41-point performance against the Chargers headlining recent showings. Unfortunately for Houston, it followed that effort up with a 7-point effort in a loss to the 49ers. It could be tough sledding for Houston this weekend.