Tennessee's women's team is a national title contender, for those wanting to find value in a futures bet 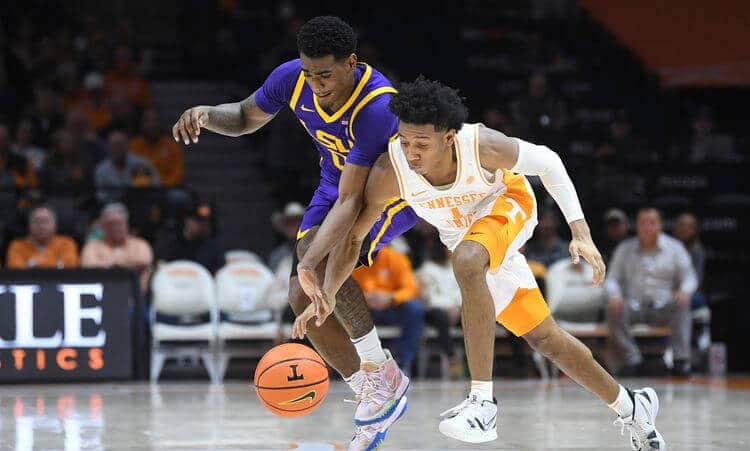 The SEC is one of the nation’s top-tier men’s basketball conferences this season, and Tennessee is among the league’s top performers. The Volunteers are 13-5 this year, and they’re widely recognized as a top-20 team nationally.

Wednesday night, they host a Florida squad that’s battling for an NCAA tournament bid. Most Tennessee sportsbooks have the Volunteers as 9.5-point favorites as of Wednesday morning, including BetMGM, Caesars, DraftKings, FanDuel, TwinSpires, and WynnBET.

As for the Tennessee moneyline, it ranges from -475 to -500 depending on sportsbook. BetMGM, Caesars, and DraftKings have -475, while TwinSpires and WynnBET have -500.

Tennessee has been profitable at home, going 10-0 overall and an impressive 7-3 against the spread. The Volunteers have notable home wins over Arizona and LSU, dispatching the Tigers 64-50 on Saturday, covering the spread in each triumph.

Rick Barnes’ team last lost at home on Feb. 20, 2021, falling to Kentucky. The Volunteers’ defense, coupled with an engaged home crowd, has kept the team within the AP top 25 for much of this season. According to KenPom.com, the Volunteers have a top-50 home-court advantage in college basketball, and they’re the fifth most efficient defense in the country.

The total for the game is at 132.5 points at most Tennessee sportsbooks, although DraftKings goes up to 133.5 points.

Tennessee is going up against a Florida squad that can’t consistently play at its best. After losses to Alabama, Auburn, and LSU, the Gators rattled off three consecutive victories before a Monday letdown at Ole Miss.

While Florida doesn’t have many terrible losses — a home loss to Texas Southern is an eyesore — the Gators also don’t have many great wins. A road win at Tennessee would certainly help the team’s postseason resume, potentially helping it lock down a spot in the Big Dance come March.

Vanderbilt has lost four of its last five contests, scuffling after picking up nice wins over BYU and Arkansas. The Commodores are outside the NCAA tournament picture, and they’ll need a stellar finish to the season to put themselves in the bubble mix.

Jerry Stackhouse’s team plays at South Carolina on Wednesday, and the Commodores are widely considered 1-point underdogs entering the clash.

Elsewhere in Tennessee on Wednesday, Chattanooga hosts Wofford. The Mocs are 5.5-point favorites in the conference matchup, and they’re considered one of the nation’s most dangerous mid-major squads. Offensively, KenPom.com ranks the Mocs as the 32nd most efficient offense in college basketball. Chattanooga defeated Wofford 75-67 in a meeting earlier this season.

Chattanooga and Belmont are a pair of mid-major squads from Tennessee to keep an eye on when March Madness arrives.

Tennessee’s women’s basketball team is 18-1 this season, dominating the competition with stellar defense. The Volunteers, led by third-year head coach Kellie Harper, have held all but one opponent under 40% shooting this season, using stifling defense to move to No. 4 in the latest AP poll. They’re positioned nicely to possibly earn a No. 1 seed in the NCAA Tournament, although emotional leader Keyen Green recently tore her ACL and will miss the remainder of the season.

This is a huge win for Tennessee, solidifying the Lady Vols spot as a No. 1 seed. They have now beaten Georgia, Arkansas, Ole Miss, Virginia Tech, and UCF (all tournament-worthy teams) on the road. The bummer for WCB fans is that the South Carolina game is still a month away.

Finding odds on women’s basketball games and futures can be a challenge, depending on the sportsbook, although DraftKings has Tennessee at +4500 to win the national championship. The team’s last of eight national titles came in 2008 with the late Pat Summit serving as head coach.

Tennessee Action 24/7 does offer women’s basketball lines for those looking to place wagers on the Volunteers each time they take the floor.