Each team has flashy skill players, but the offensive lines might be the key to Saturday's showdown 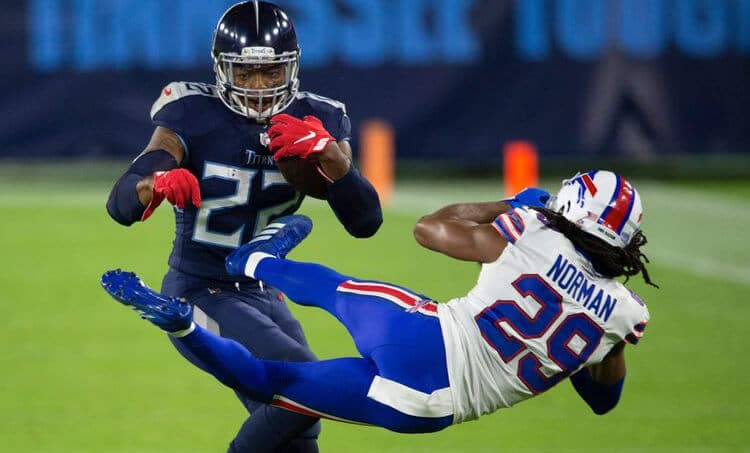 The Tennessee Titans are one win away from playing for an AFC Championship, two wins away from competing in the Super Bowl, and three wins away from hoisting the Lombardi Trophy.

Despite having home-field advantage in the AFC as the No. 1 seed and a roster returning to health, betting markets aren’t all that high on Tennessee. The Titans’ Super Bowl odds sit at +850 at BetMGM, DraftKings, FanDuel, handing them the third-worst odds to win the title of the eight remaining playoff squads. The NFC’s No. 1 seed, Green Bay, is the Super Bowl favorite at most Tennessee sportsbooks.

Titans are 4-0 this year against the remaining teams https://t.co/eh7K2d0ycv

Despite the doubters, Tennessee likes its chances to make a deep playoff run. The injury-plagued team is about as healthy as it has been all season, with many of its key playmakers geared up for a postseason push.

Running back Derrick Henry, the NFL’s most powerful ball carrier, is expected to play for the first time since suffering a foot injury on Oct. 31. An injured Tennessee was dangerous, and the Titans hope a healthier unit has what it takes to win the Super Bowl.

“Derrick Henry is always a guy defenses have to account for and game plan around, even if he is limited,” Dave Kaestle, sports betting and fantasy editor at The Duel, told TN Bets via email. “The Titans are 5-1 this season in games he rushed for at least 80 yards. So Henry having a good game will always put them in position to win, but even as a decoy he should open up a lot more for the Titans’ other skill position players.”

Tennessee is a slight favorite Saturday against Cincinnati, which boasts one of the NFL’s most explosive offenses. Led by quarterback Joe Burrow and wide receiver Ja’Marr Chase, the Bengals have really stressed opposing secondaries. Burrow led all quarterbacks this season by averaging an impressive 8.9 yards per pass attempt.

The matchup between the Bengals outside WRs and Titans outside CBs is going to be very interesting. Higgins and Chase are both elite contested catch makers, but Fulton and Jenkins are two of the toughest contested catch corners in the NFL. Gonna be some big time battles there.

Despite Cincinnati’s offensive prowess, the Titans are home favorites Saturday, with BetMGM, Caesars, DraftKings, FanDuel, TwinSpires, and WynnBET listing Mike Vrabel’s squad as 3.5-point favorites. The Titans’ moneyline ranges from -180 to -190 across major Tennessee sportsbooks, with BetMGM and DraftKings offering -180.

Tennessee has impressed at home this season, going 7-2 overall and winning its last three games in Nashville by a combined score of 74-20. The Titans are 3-1 at home this season against teams that made the playoffs, and their lone loss came in Week 1 to Arizona.

Cincinnati went 5-3 overall on the road this season, including an impressive 6-2 mark against the spread. The Bengals are 3-2 straight up and 4-1 ATS as a road underdog, while Tennessee is 4-2 overall and 3-3 ATS when favored at home.

“Both sides have trends and stats you can point to that would suggest an advantage here, which is probably why this line landed on the pesky 3.5 number,” Kaestle said. “In the end, I would expect this one to be close, and could ultimately come down to whether the Bengals can successfully exploit the Titans’ weaker secondary, or if the Titans can get their ground game going effectively enough against a Bengals squad that ranked No. 7 this season in opponent rush yards per game to open things up in the passing game.”

Saturday’s showdown features some of the NFL’s top receiving threats, as Chase and Tennessee’s A.J. Brown are among the league’s most dynamic playmakers.

In his rookie season, Chase notched 81 receptions for 1,455 yards and 13 touchdowns. His chemistry with Burrow began in college at LSU, and it has translated seamlessly into the NFL. Chase’s over/under receiving prop is 76.5 yards at most sportsbooks, including BetMGM and DraftKings.

While Brown has battled injuries for the Titans, he’s a force when fully healthy. Despite playing in just 13 of the team’s 17 games, Brown had 63 receptions for 869 yards and five touchdowns. He posted 1,000-yard seasons in 2019 and 2020, his first two seasons in the NFL after a productive college career at Ole Miss. DraftKings lists Brown’s receiving prop total at 72.5 yards.

Each team also has tremendous offensive talent outside of its top receiver, with Cincinnati boasting wideouts Tee Higgins and Tyler Boyd, as well as running back Joe Mixon. As for Tennessee, wide receiver Julio Jones caught five passes, including a touchdown, in the team’s regular-season finale and seems to be healthy enough to make a meaningful postseason impact. Add in running back Derrick Henry, who’s listed at -190 to score a touchdown at any point in the game at most sportsbooks, and both teams have solid weapons at skill positions.

When it comes to scoring in this contest, keep a close eye on each team’s offensive line. Both sides are prone to allowing sacks, with each ranking in the bottom 10 of the NFL in quarterback sacks allowed.

“The Bengals are 5-6 this season when surrendering at least 3 sacks, so getting to Burrow has shown some correlation with success,” Kaestle said. “Conversely, the Titans were 6-3 when Ryan Tannehill was sacked at least three times. NFL playoff games are usually won in the trenches, so whichever team is able to exploit this weakness best should have the upper hand. The news that Cincinnati’s Trey Hendrickson will play should be huge for the Bengals. Fourteen sacks this year makes him a guy Tennessee will now have to plan around.”

If the offensive lines can protect each quarterback, the over is a sensible bet.