Middle Tennessee A Double-Digit Underdog Against Toledo In Bahamas Bowl

The Bahamas Bowl is back, and Middle Tennessee and Toledo will soak up the sun in Nassau Friday 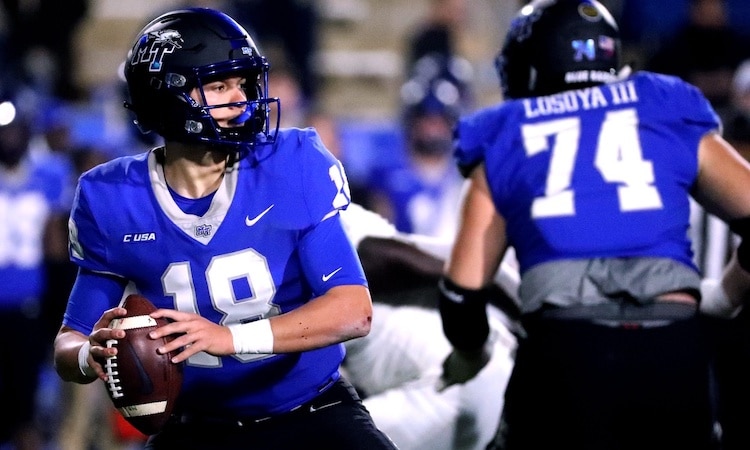 After a year off due to COVID restrictions, the Bahamas Bowl is back, and the football teams for Middle Tennessee State and Toledo will get to soak up the sun at Thomas Robinson Stadium in Nassau on Friday. Temperatures in the 80s are expected for the first bowl game of the year, which will surely be welcome, considering Toledo, Ohio, will experience a high of 43 Friday, and Murfreesboro, Tenn., is set to get three days of rain.

But outside of the weather and some dramatic past results (check out the 2014 edition for one of the wildest finishes in bowl history), this matchup isn’t expected to be a sparkling display of football talent.

Both squads eked their way into bowl eligibility. The Blue Raiders (6-6) finished fourth in Conference USA’s East Division and needed a 27-17 upset of Florida Atlantic to get into the Bahamas Bowl, while Toledo (7-5) was looking at a 4-5 record until it won its last three games to finish third in the MAC West.

That Toledo win streak and its offense, ranked 38th in the nation, are two big reasons why the Rockets are favored by 10 points at most Tennessee sportsbooks. But if you’re looking for a little bit more on Middle Tennessee, you can get 10.5 at BetMGM and TwinSpires.

Do Blue Raiders have a chance at an upset?

Underdogs have a 3-3 record against the spread in Bahamas Bowl history, but they’ve only won once outright. That came in 2018, when seven-point dog Florida International took down Toledo by a score of 35-32. Middle Tennessee’s lone appearance in the Bahamas Bowl was a 45-31 loss to Western Michigan in 2015.

The key to a Middle Tennessee victory may be defending the passing game, specifically limiting Toledo quarterback Dequan Finn, who has 16 touchdown passes to just one interception this year and is a big reason the Rockets finished the regular season with four wins in their last five games. Finn replaced Carter Bradley in Toledo’s 22-20 loss to Northern Illinois on Oct. 6 and has held the starting role since.

Dequan Finn has had some strong performances. 💪

Over the past three games the @ToledoFB QB has thrown for 881 yards and 7TDs, helping the Rockets have a great second half of the season! pic.twitter.com/qNH8fRtDe1

But Middle Tennessee is ranked 83rd in the nation in passing defense, and the last time the Blue Raiders faced a team with a winning record, they gave up 48 points to Western Kentucky.

Who will get the majority of snaps for MTSU?

While Toledo only had to make one quarterback switch this season, Middle Tennessee has been a mess under center. Early season starter Bailey Hockman walked away from football entirely three games in and his replacement, Chase Cunningham, was knocked out for the season during a win over Southern Mississippi in late October.

Since then, freshman Nick Vattiato has taken most of the snaps. But last time out against FAU, Vattiato and sophomore Mike DiLiello completed 12 passes apiece.

Against one of the MAC’s best passing defenses (Toledo ranks 17th nationally against the pass), moving the ball through the air may not be so easy. The ground game hasn’t been a strength for the Blue Raiders either, as they rank 106th nationally in rushing.

What about the total?

There are a few trends to support the over in the Bahamas Bowl, and if you’re leaning that way, you can head to FanDuel or TwinSpires to get 50, as opposed to 50.5 at most Tennessee sports books.

Jeremy Balan has been a journalist, editor, and sports writer since 2007. After years covering prep, college, and pro sports for online and print media, he focused on turf writing at BloodHorse from 2015-2019 and won an Eclipse Award for his coverage of the devastating fire at San Luis Rey Training Center. Contact Jeremy on Twitter (@jeremybalan) or through email at jbalan@bettercollective.com.

Jeremy Balan has been a journalist, editor, and sports writer since 2007. After years covering prep, college, and pro sports for online and print media, he focused on turf writing at BloodHorse from 2015-2019 and won an Eclipse Award for his coverage of the devastating fire at San Luis Rey Training Center. Contact Jeremy on Twitter (@jeremybalan) or through email at jbalan@bettercollective.com.