Vols Favored To Continue Resurgence, But Vandy In Gainesville Is A Different Story

Tennessee may not win by 38 again, but odds suggest it'll do so in double digits 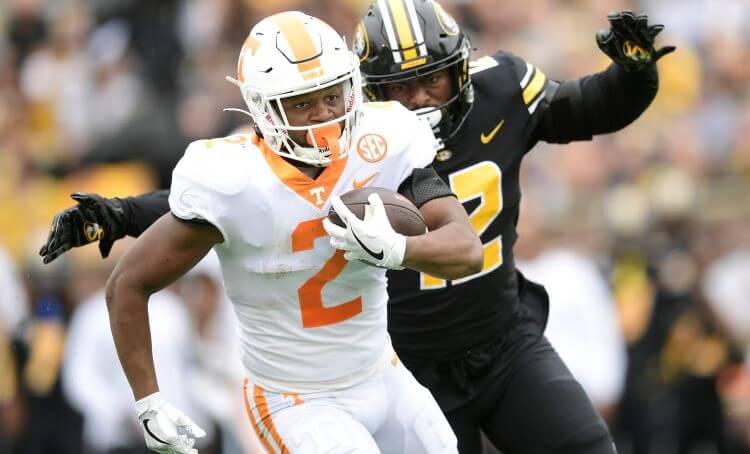 Tennessee surprised a lot of people last week by waltzing into Missouri and emerging from Columbia with a 38-point victory that seemingly could jump-start the Vols’ season.

The proof of whether that was for real could materialize at Neyland Stadium at noon Saturday when Tennessee hosts South Carolina, with the oddsmakers sufficiently impressed to have installed the Volunteers as double-digit favorites. Vanderbilt, meanwhile, has to travel to Gainesville, with Commodores backers who believe in miracles able to get a 55/1 return on their investment if Vandy beats Florida for the second time in three decades.

Fortunately, the state’s legal online sportsbooks don’t make that the only betting option for NCAA football. We outline below the main odds they’re offering for the state’s SEC programs.

Tennessee went into Missouri a .500 team with no impressive wins and a 3-point underdog. After a 62-24 victory, no one’s comparing the Vols to Alabama or Georgia, but they look to have a lot more potential than they did a week ago.

They are 10.5-point favorites across the board against the Gamecocks, with TwinSpires giving the best edge for a Tennessee bet Thursday morning by offering reduced juice of -107. BetMGM and WynnBet, however, were offering the best moneyline option for Tennessee bettors at -400. They, Caesars, and TwinSpires set the over/under on the game’s points total at 56.5, while DraftKings listed 57 and FanDuel went up to 57.5.

That “over” is definitely in jeopardy if coach Josh Heupel’s up-tempo offense succeeds at anywhere near the pace it did last week, amassing 683 total yards, 458 of them on the ground. Hendon Hooker has settled in nicely at quarterback since replacing the injured Joe Milton in the Pitt game. The graduate transfer from Virginia Tech has thrown for 10 touchdowns with just one interception.

Like Tennessee, South Carolina has a first-year coach in Shane Beamer, and his team is also 3-2. The Gamecocks have no impressive wins on their resume, however, as the victories have come against Troy (23-14 last week), Eastern Illinois, and East Carolina. Their best game may actually have been their 16-10 loss to a now-ranked Kentucky team.

South Carolina has been stronger on defense than offense, forcing 14 turnovers by opponents while holding them to just 300.6 yards per game. South Carolina ranks 23rd nationally in points defense and the points total has gone “under” in four of their five contests.

Can Vandy keep the margin under 40?

So it wasn’t all that long ago that Vanderbilt beat Florida in football — just eight years back under now-Penn State coach James Franklin. But that was a better Commodores group than the current one that had to sneak past Connecticut 30-28 in its last game, even as a rare two-TD favorite.

Florida had its own problems Saturday, getting upset 20-13 by Kentucky, which dropped them from 10th to 20th in the AP rankings. That might only have the Gators in an even nastier mood than usual. The oddsmakers have thus mostly installed them as 38.5-point favorites for the noon contest, although DraftKings goes up to 39 (at -115 juice).

The prospect of a Vanderbilt win seems so ludicrous that only FanDuel and WynnBet were offering a moneyline option on the game Thursday morning, with FanDuel’s the +5500 referred to above. FanDuel also has the highest over/under on the points total, at 60.5, while Caesars uses 60 and WynnBet, DraftKings, BetMGM, and TwinSpires are at 59.5.

Vandy has had 14 straight SEC losses, and this doesn’t seem like the game to snap that streak, considering how Florida manhandled Tennessee 38-14 last month. Florida’s only loss besides Kentucky came against No. 1 Alabama, and that was just 31-29.

Florida’s offense is third in the nation in rushing at 292.2 yards per game, and to show some balance, the Gators defense has had 18 sacks. It could be a long afternoon in Gainesville for a lot of Commodores, but QB Ken Seals in particular.