Tennessee's a small underdog at Missouri, while Commodores find themselves a rare favorite 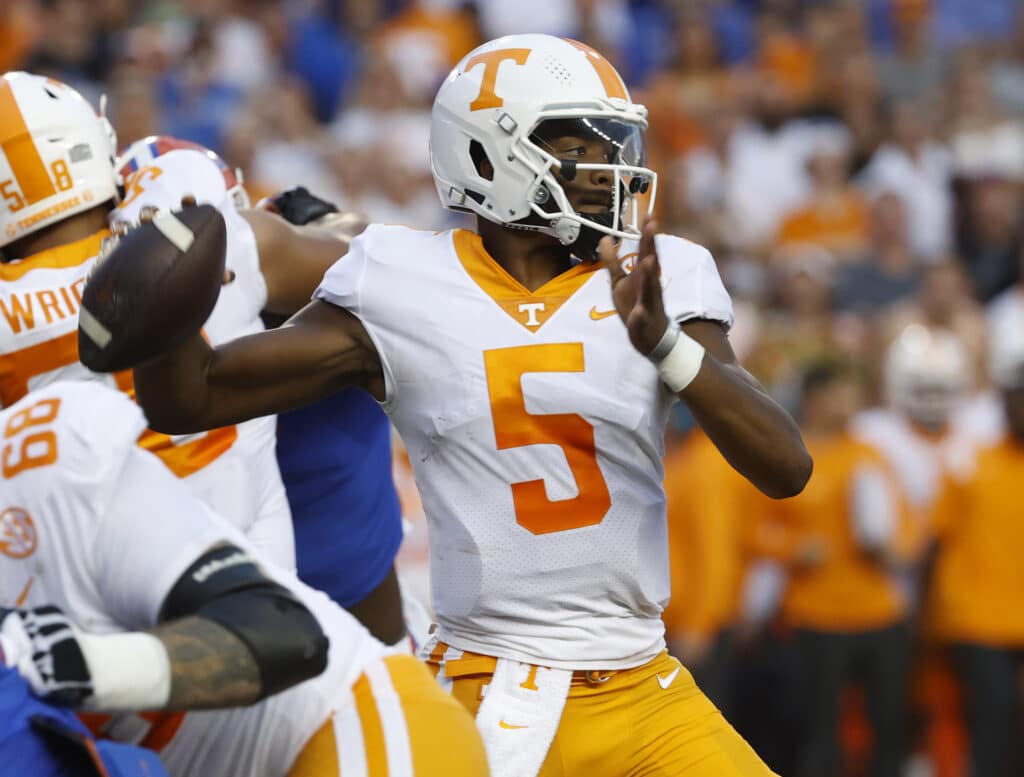 Tennessee’s two SEC programs are in search of bounce-back wins Saturday as the Volunteers travel to Missouri for an intra-division clash and Vanderbilt is in an unfamiliar position as a double-digit favorite at home versus UConn.

The Vols (2-2, 0-1 SEC East) played a solid first half last weekend at No. 11 Florida but were outscored 21-0 in the final two quarters of a 38-14 defeat. Hendon Hooker threw a pair of big-play touchdown passes covering 47 and 75 yards but was also forced to leave in the fourth quarter due to injury, and Joe Milton finished under center.

Vanderbilt (1-3) has nowhere to go but up after being throttled 62-0 by No. 2 Georgia at home last Saturday. Two turnovers contributed to a deluge of first-quarter points as the Commodores fell behind 35-0 before the game was 12 minutes old. Clark Lea’s team finished with 77 total yards as it dropped its 14th straight conference game.

Sportsbooks across the state have first-half and full offerings for both contests, so without further ado, let’s dive in and do some line-shopping.

Saturday’s matchup serves as a homecoming of sorts for first-year Tennessee coach Josh Heupel, whose coaching star began to ascend when he served as Missouri’s offensive coordinator from 2016-17. This week he noted Hooker — who has thrown for 613 yards and seven TDs with only one interception — did not have a concussion, but he was unsure about his availability.

Milton, who started the season as the team’s No. 1 QB, has yet to fully grow comfortable with Heupel’s high-octane offense, completing just 46.5 percent of his passes for 243 yards and one touchdown.

The unresolved status under center has created some variety for sportsbooks. DraftKings and TwinSpires are offering the Vols at +3, with the latter a slightly better value at -112 compared to DraftKings’ -115 offering. Four other books — FanDuel, BetMGM, Caesars, and WynnBET — all listed Tennessee +2.5 at different values Friday morning.

BetMGM is the best offer for Vols backers with the points at +105, while FanDuel is also plus-money at +102. WynnBET lurks close behind at even money (+100), while Caesars has a standard -110 in both directions.

While DraftKings may have the highest cost in terms of the spread, it does have the best moneyline offering for Tennessee at +130. FanDuel (+126) edges out BetMGM, Caesars, and WynnBET — all +125 — for second, and TwinSpires sits just off that trio at +124.

TwinSpires is also offering parlay combinations with both the moneyline and spread coupled with the over/under. For the moneyline, a Tennessee victory with either selection would pay out +320. Vols bettors can take the field goal and the over at +270 or the +3 and the under for +250.

To put into perspective how out of place this week’s line for Vanderbilt looks, consider this is the first time it has been favored — let alone a double-digit one — against an FBS team since being -16.5 entering a home game against UNLV on Oct. 12, 2019. The Commodores have not covered as a favorite since they were -3.5 ahead of beating Tennessee 38-13 on Nov. 24, 2018, but they also have not been offered many such opportunities of late.

UConn (0-5), however, is among the worst of the worst FBS programs in 2021. The Huskies did put a scare into Wyoming last weekend, leading 13-0 in the second quarter and 16-10 with 11:16 to play of their 24-22 home loss. Tyler Phommachanh threw for 171 yards and a touchdown, but a game-tying 2-point conversion pass with four seconds left fell incomplete.

The Huskies have given up an average of 41.6 points in their five defeats and been outscored 97-21 in road losses to Fresno State and Army.

Oddsmakers are practically daring Vanderbilt backers to show their allegiance as BetMGM (-110), TwinSpires (-112), DraftKings (-115), and Caesars and WynnBet (both -120) are offering the ‘Dores with a high-side hook at -14.5. FanDuel is currently a full point higher at -15.5 but also offering that play at -108.