Despite a rough end to the regular season, the Vols can enter the NCAA tournament on solid ground with a deep run through the SEC tournament. 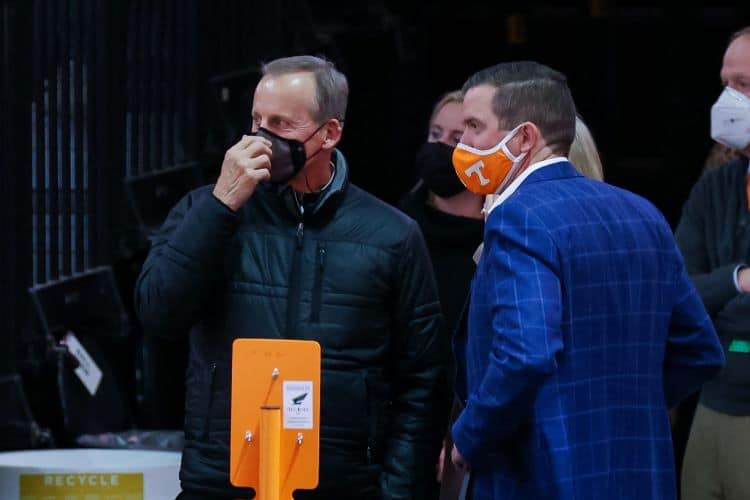 With a win over Florida to cap the regular season, the Tennessee Volunteers temporarily stopped the bleeding from a vexing losing skid.

The Vols, who entered the season as a chic pick to win the Southeastern Conference, defeated the Gators 65-54 to finish the regular season fourth in the SEC standings. Before the victory, Tennessee lost three of its previous five games to drop out of the AP Top 25. Tennessee opened the season with seven straight wins, reaching as high as No. 7 in the nation.

Ahead of this week’s SEC tournament, the Vols could regain momentum for the NCAA tournament with a deep run in Nashville. At FanDuel, the Vols (+500) are the third choice to win the SEC tournament behind Alabama (+240) and Arkansas (+300).

Breaking down the SEC bracket

Tennessee is off until Friday when the Vols will play the second of four quarterfinal matchups at Bridgestone Arena. The Vols will either face Florida again or the winner of Wednesday’s opening-round tilt between Texas A&M and Vanderbilt. Tennessee went 4-1 combined against the three teams in the regular season.

A win by the Vols on Friday will likely set up a matchup against top-seed Alabama in the SEC semifinals. When Alabama defeated Tennessee 71-63 on Jan. 2, guard John Petty Jr. hit all four of his 3-point attempts as the Crimson Tide drained 10 threes on the night. Alabama, which shot 50 percent from beyond-the-arc in the matchup, leads the conference with 288 3-pointers made. Auburn, the next closest in the league, hit 245 on the season.

2021 SEC Tournament Betting Breakdown 🏀#Alabama & #Arkansas are the favorites but do they make for the best bets? Our Vegas insider @Frankie_Fantasy shares his tourney insightshttps://t.co/qTauZjiNlf

If the Vols advance to the finals, they could face second-seed Arkansas or third-seed LSU in Sunday’s championship game. Arkansas enters the SEC tournament as one of the hottest teams in the nation. The Razorbacks have won eight straight, including an 81-66 win over then No. 6 Alabama on Feb. 24. Arkansas is now ranked eighth in the nation. Tennessee, however, defeated Arkansas 79-74 on Jan. 6, in the lone matchup between the teams this season.

Leading up to Conference Championship Week, Tennessee received a No. 6 seed in ESPN’s latest version of Bracketology. The Vols were slotted in Region 3 against No. 11 Georgia Tech in the Round of 64 of the NCAA tournament. In the same bracket, No. 3 West Virginia is scheduled to face No. 14 Morehead State, the Ohio Valley Conference tournament champion.

At PointsBet, bettors can wager on the over/under of Tennessee’s seed in the NCAA tournament. There is considerable juice on under 6.5, at Minus-175. Conversely, the over 6.5 has odds of +130 at PointsBet. If Tennessee reaches the SEC finals, there is a strong possibility that the Vols can move up to a five seed — especially if others on the seed line falter during Conference Championship Week.

With heavyweights such as Gonzaga and Baylor putting forth historic campaigns, it could be difficult for a sleeper to win it all. As a result, a litany of sports betting sites are offering lines on teams to make the Final Four. At FanDuel, the Volunteers have odds of +750 to make the Final Four for the first time in school history. Bettors will receive even stronger odds at DraftKings, where Tennessee is currently +900 to reach the national semifinals. Tennessee reached the Elite Eight in 2010, the program’s top result ever in the NCAA tournament.