Red-hot Memphis has been the futures market’s biggest mover 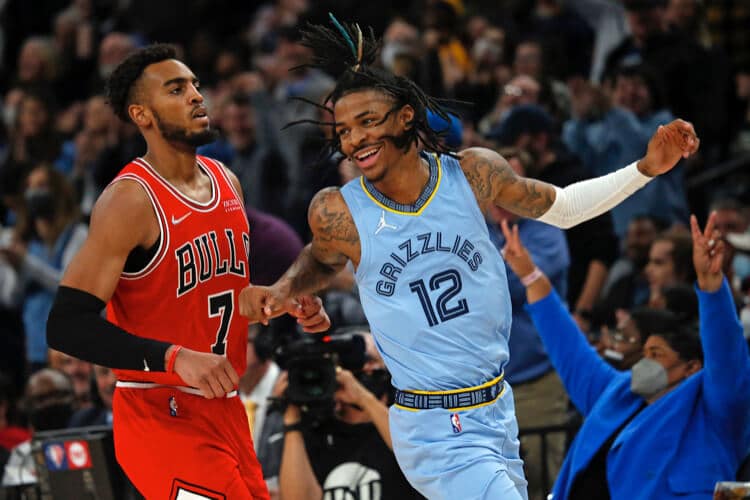 With the Memphis Grizzlies nursing a six-game winning streak less than two weeks ago, Caesars and most of Tennessee’s mobile sportsbooks assigned the Southwest Division-leading squad 30/1 odds of winning the Western Conference.

Just a week later, with the winning streak at 10 games, those odds had been halved at just about every sportsbook but FanDuel, which subsequently shortened its price after the streak reached 11.

The Grizzlies’ run ended with a loss to division rival Dallas at home this past Friday, but Memphis bounced back admirably to defeat the Eastern Conference-leading Chicago Bulls by a score of 119-106 Monday.

“I think they’ve been the most aggressive adjustment,” WynnBET Senior Trading Manager Alan Berg said of Memphis’ futures movement. “The [Cleveland] Cavs is the only thing I can really say was close. I think a few books were maybe out too far on the Bulls, but we kind of saw that. We expected them to be about a three or four seed.”

‘Maybe a year away’ from contention

Memphis starts a four-game road trip Wednesday in Milwaukee, where WynnBET installed the Grizzlies as 5.5-point underdogs against the defending NBA champs. Bettors who like Memphis on the moneyline can bet it at +190, while the over/under was set at 227.

A road win against the Bucks would be a statement of sorts, just as victories over the Warriors, Nets, Lakers, and Suns were during that 11-game streak. But Memphis lacks the playoff pedigree of those squads, making it a safe bet that any odds movement will be a little more conservative from here on out.

“I think we’ve got to see them win some of those seven-game [playoff] series before we take them more seriously,” said Berg, who added that the Grizzlies, who are currently in possession of the West’s third seed, would “have a tough [playoff] road even with the one seed after they get through the first round.”

“They’re an NBA championship-caliber team, just not yet,” Berg concluded. “I think they’re maybe another year away. … Everybody likes to see the new team get out there and make it to the finals, but in the West … it’s a packed house.”

While the Grizzlies’ supporting cast has been superb this season, discussion of late has centered on the emergence of Ja Morant, who is the runaway favorite to win the league’s Most Improved Player award (-180 at WynnBET). Morant has been so sensational that he’s also leapt into serious consideration for MVP honors, especially now that Kevin Durant is likely to be sidelined for at least a month with a knee injury.

WynnBET currently has Morant at 10/1 odds to win MVP, tied with Joel Embiid and trailing only Steph Curry and one of Memphis’ Wednesday night opponents, Giannis Antetokounmpo.

“You see these leaps come, but I just think they’re something special about Ja’s leap,” said Berg. “You can clearly see he’s turning into a top five player in front of our eyes, when he was maybe a top 30 player with that kind of potential [last season]. To see it happen so quickly is pretty impressive.”