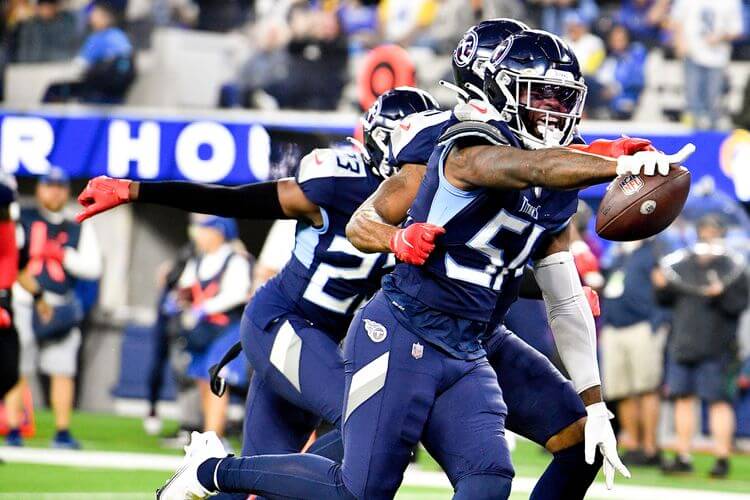 The Tennessee Titans are red hot. After a 28-16 road win over the Los Angeles Rams, Tennessee has won five consecutive games. That’s the longest active winning streak in the NFL.

Keeping the winning streak going Sunday won’t be easy, although Tennessee’s online sportsbooks slightly favor the Titans (7-2) in a home matchup with the New Orleans Saints. The Saints (5-3) have won three consecutive road games, and they’re just a game back of the Tampa Bay Buccaneers in the NFC South.

The Tennessee Titans own:

◼️ The best record in the AFC (7-2)
◼️ The longest winning streak in the NFL (5 games) pic.twitter.com/CRojmCeoEE

Tennessee is a 3-point favorite at BetMGM, Caesars, and WynnBET. DraftKings, FanDuel, and TwinSpires have the Titans as 2.5-point favorites over the Saints.

The Titans moneyline sits around -150. BetMGM and Caesars have Tennessee at -155, while DraftKings lists the Titans at -145. The Titans are -141 on TwinSpires.

BetMGM lists Tennessee at +1200 to win the Super Bowl. WynnBET offers the same +1200 odds. Even with star running back Derrick Henry injured, the Titans still appear to be one of the better teams in the league. Henry hopes to return before the season ends.

“We opened the Titans at +3000 in the preseason, and now sit at +1200 for them to raise the Lombardi Trophy,” WynnBET senior trader Grant Tucker said via email. “In the past few weeks, bettors have been very bullish on the Titans and have steadily added to our liability on them to win the Super Bowl.”

Making the postseason seems like a sure thing for Tennessee, which is -10000 on DraftKings to win the AFC South. The Titans hold a three-game lead over the Indianapolis Colts, and they defeated the Colts in both head-to-head matchups this year.

Tennessee’s opportunistic defense helped lead the Titans to a win against the Rams. Kevin Byard returned an interception for a touchdown, as the Titans intercepted Los Angeles quarterback Matthew Stafford on consecutive pass attempts. It was the first time this season that Stafford threw multiple interceptions in a game.

The defense made up for a pedestrian offensive showing.

“A few key interceptions by Kevin Byard and David Long Jr. put the Titans in a strong position,” Tucker said. “Tennessee was outgained by Los Angeles 347-194 in that contest. The loss of Derrick Henry is one that can’t really be put into words. It allows defenses to somewhat key in on the Titans’ passing game, rather than load the box to stop Henry.”

With or without Henry, the Titans keep finding ways to beat good teams. They have a 7-2 record with notable wins over the Rams, Kansas City Chiefs, and Buffalo Bills.

With a win this week, the @Titans can become the 2nd team in @NFL history to win 5 consecutive games with each win coming against a team that made the playoffs the previous season.

Tennessee looks like a legitimate contender, although it still has to navigate much of the rest of the season without Henry.

Value in betting the total?

Starting quarterback Jameis Winston won’t return this year for the Saints after injuring his knee in Week 8. Trevor Siemian has been respectable in his place, throwing for three touchdowns and no interceptions in two games.

Siemian is a downgrade from Winston, though, especially when it comes to the downfield passing game. Siemian is averaging 5.8 yards per attempt. Winston averaged 7.3.

“Siemian is much more of a game manager type of quarterback than Jameis Winston,” Tucker said. “While he was effective coming into the game against the Buccaneers in Week 8, he doesn’t really move the needle. He doesn’t push the ball down the field like Winston, which we have taken into account.”

With Henry and Winston out, the point total is at 44.5 points on BetMGM, Caesars, FanDuel, and WynnBET. DraftKings has the total at 44.

“Our numbers actually have this total a couple points higher than what we are hanging right now, but out of respect for the market, we currently sit at 44.5,” Tucker said.