Despite Injury Concerns, ‘Battle-Tested’ Titans Favored To Beat Low-Flying Jets On The Road

Tennessee could be without its top two receivers, but should still get the win 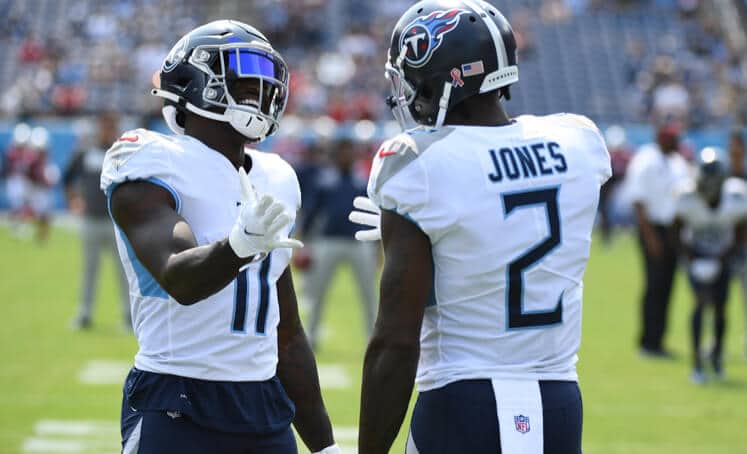 If the first three weeks of this NFL season have reminded us of anything, it’s that rookie quarterbacks typically suck — or, to put it more diplomatically, require a year of sucking before they (hopefully) no longer suck.

And no rookie quarterback has sucked harder than Zach Wilson of the New York Jets.

Picked second in the NFL draft after Trevor Lawrence, another first-year signal-caller who has struggled, Wilson has thrown seven interceptions against just two touchdowns in the Jets’ three losses, leading to a league-worst quarterback rating of 51.6. But pinning the Jets’ woes squarely on Wilson’s suckage simply isn’t fair, because the Jets’ entire team is a paean to suckitude.

“It’s not like when we were thinking about Zach Wilson coming in, he was gonna be a world beater, by any means,” said Motoi Pearson, a senior trader for WynnBET. “But he’s not even getting any help. That, in general, is going to help us move the marker on the Jets, either for better or worse.”

The good news for the Jets is they host a Titans team this Sunday that may be without one or both of its top two receivers, A.J. Brown and Julio Jones, each of whom is battling injury.

“I think it’d be cool if they weren’t hurt all the time,” said Pearson, noting that, as a handicapper, it’s tough to get a bead on the Titans due to this duo’s propensity for getting dinged up. “We didn’t think Julio was gonna be the Julio of old, but it’s just been so much of a small sample size. Once he gets used to the offense and gets healthy, hopefully we’ll see him do what we thought he’d do as the No. 2 guy on that team.”

The bad news for the Jets is they’re still the Jets, which is why they’re a consensus 7-point underdog at Tennessee’s mobile sportsbooks. The over/under is 44.5 everywhere but DraftKings, which puts it at 45 points. There’s not much money to be made on the moneyline unless you have a lot of it to risk, with BetMGM offering the best price (-300) on a Titans win as of Thursday afternoon.

Should neither Brown nor Jones be good enough to go, sports bettors would be wise to look for player props involving Nick Westbrook-Ikhine, who would become Ryan Tannehill’s default No. 1 target.

Last week, the Titans handled the Colts by nine points at home, cementing their status as the favorite to win a lackluster AFC South. Pearson said that while WynnBET “favored the Colts at first,” injuries to key Indy starters like QB Carson Wentz have cut into that confidence considerably.

“We were definitely shocked when [the Titans] took that loss to the Cardinals, but we respect [coach Mike] Vrabel, we like Tannehill, we like [Derrick] Henry,” said Pearson. “I think it’s more just, on a defensive basis, if they can hang tight and win the close games. They’re pretty battle-tested at this point.”