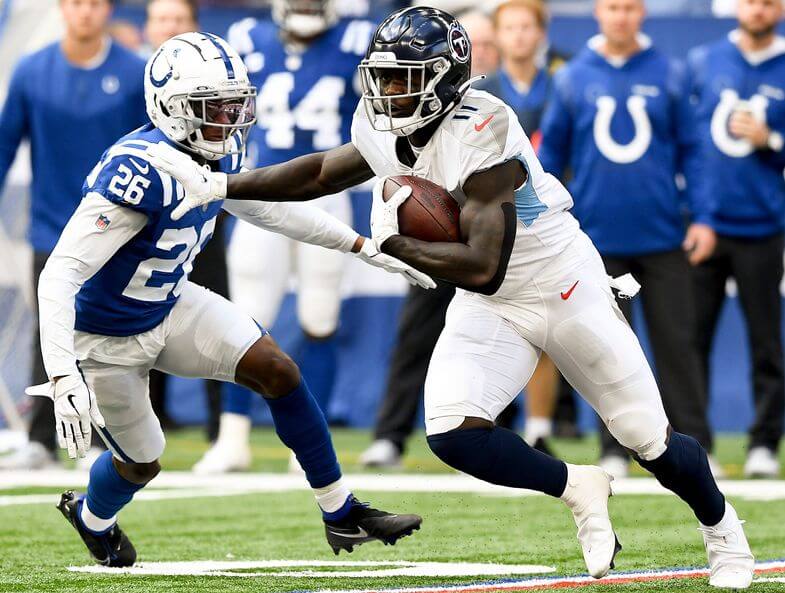 The Tennessee Titans’ Sunday night matchup with the Los Angeles Rams features two of the NFL’s best teams. Unfortunately for Tennessee, it lost an MVP candidate.

A couple weeks ago, sports media sites were writing stories about Derrick Henry’s chances of setting the NFL single-season rushing record. Henry’s chances are now dashed, but not due to any fault of his own.

Henry suffered a foot injury in the team’s 34-31 overtime win over the Indianapolis Colts last weekend. Surgery will sideline him for  six to 10 weeks, taking him out of Sunday night’s primetime matchup with the Los Angeles Rams, who are a Super Bowl favorite.

While Tennessee (6-2) will move forward without Henry, the Rams (7-1) were active ahead of the NFL’s trade deadline. Los Angeles added outside linebacker Von Miller. The decorated pass rusher joins a Rams defense that includes stars like defensive tackle Aaron Donald and defensive back Jalen Ramsey.

Von Miller will make his Rams’ debut on Sunday Night Football vs. the Derrick-Henry-less Titans.

Both the Titans and Rams enter the matchup on four-game winning streaks, but oddsmakers are much more bullish on Los Angeles’ Super Bowl hopes than those of the Titans. DraftKings and FanDuel both list the Titans at +2200 to win the Super Bowl.

Tennessee, which opened at about a 4-point road underdog vs. the Rams, is now a 7- or 7.5-point ‘dog, depending on which sportsbook you use. BetMGM, TwinSpires, and WynnBET list the Titans as 7.5-point underdogs, while Caesars, DraftKings, and FanDuel have the Rams as 7-point favorites.

Even with the NFL’s leading rusher absent, the total is the highest of any NFL game on this weekend’s slate. DraftKings and PointsBet have it at 52.5 points, while Caesars lists the over/under at 53. BetMGM, FanDuel, TwinSpires, and WynnBET have the total at 53.5.

Finding ways to score against the Rams’ stout defense, which gains Miller, could be a challenge for Tennessee. The Titans, however, have scored at least 24 points in seven consecutive games. They average 28.4 points per game, the sixth-best mark in the NFL.

Without Henry, the Titans will lean on newly signed Adrian Peterson as well as Jeremy McNichols, who has been a productive receiving threat for Tennessee this season and is now in line to receive more carries. Peterson, who’s expected to be ready to go Sunday, gives the team a more physical running presence to complement McNichols. It remains to be seen how much the 2012 NFL MVP, now 36 years old, has left in the tank, but he ran for 604 yards with the Detroit Lions in 2020.

The #Titans are expected to work out veteran RB Adrian Peterson this week, sources say, in the wake of the Derrick Henry foot injury. Tennessee could replace the MVP candidate with one of the greatest running backs of all time.

Ryan Tannehill and the passing attack may be asked to play a bigger role due to Henry’s injury, with wide receiver AJ Brown posing a mismatch for most secondaries.

Offensively, the Rams are one of the top scoring units in the NFL. They average 30.6 points per game, the fifth-best mark in the league. Quarterback Matthew Stafford is an MVP candidate (+600 at BetMGM) in his first season with Los Angeles. He’s been efficient, firing 22 touchdown passes against just four interceptions. And his connection with Cooper Kupp is superb, as the wideout has notched at least five catches for 60 yards in every game this year.