Nearby visitors arrive by car, foot, and sea to get bets down in Tennessee 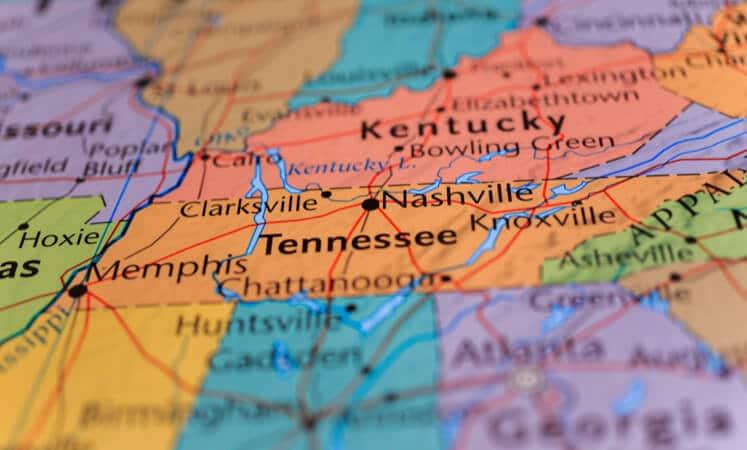 Men, one to a car, pull off the interstate and find the nearest truck or rest stop during Saturday’s off hours. Dressed in loose-fitting clothes, they stare down at their phones and scroll, looking for action. They’ll either be parting with their money or making some the hard way, a ritual they may be hiding from their wives back home.

We are talking, of course, about mobile sports wagering in the state of Tennessee.

Horizontal as can be, Tennessee is bordered by more states — eight — than any of its U.S. counterparts, save for Missouri. Only one of these neighbors — Virginia — offers legal online sports betting. (There are brick-and-mortar sportsbooks in Arkansas and Mississippi.) Hence, it should come as no surprise that folks from Alabama, Arkansas, Georgia, Kentucky, Mississippi, Missouri, and North Carolina cross into the Volunteer State to place bets on their phones with some frequency — and often in hilariously functional locales.

Since mobile sports wagering got up and running in 2018 in New Jersey but not (yet) in New York, it’s been no secret that Big Apple bettors have been crossing the George Washington Bridge to place bets on the Garden State side of the Hudson. But it was still a hoot to read The New York Times’ description of how the bridge has morphed into an al fresco sportsbook on Sundays, with (mostly) dudes on bicycles whipping out their phones mid-expanse to make wagers.

Betting while driving — and boating

To the south, the equivalent can be found on the Arkansas-Tennessee border, where the mighty Mississippi separates West Memphis from Memphis proper. Here, there’s a foot bridge called the Big River Crossing that’s reserved for pedestrians and cyclists — many of whom, according to GeoComply Government Relations Director Danny DiRienzo, are Arkansas residents who need to get their bets down on the Tennessee side of the line.

“We have heat maps that display where the bulk of the activity is occurring,” noted DiRienzo, whose tech-savvy employer tracks precisely where people wager from.

But it’s not just people crossing over the bridge who are getting action down. Steer a dinghy to just the right midstream spot, and you can bet the under.

“You can actually see boat traffic right in the middle of the river,” DiRienzo said. “It could be leisure craft or cargo ships, but it’s definitely boat traffic, and it’s falling right on the state line as these pins are dropping.

“We’ve got the same thing on the north side out of Kentucky on I-65. There’s nothing there except for a couple gas stations. It’s clearly players coming in from Kentucky.”

To this end, DiRienzo said, “The vast majority of [GeoComply’s] border traffic is on the interstates or the first exit” off those heavily trafficked federal highways.

“There’s a section of I-24 in the Chattanooga area. It dips into Georgia, then dips back into Tennessee,” DiRienzo explained before last weekend’s slate of football games. “On each side of that dip, right on the Tennessee border, we had about 6,000 geolocation transactions just since NFL kickoff — from Sept. 9 through Oct. 20. About 1,400 unique players, and that’s on the interstate.”

These figures are small beer compared to the twin towns of Ardmore, Ala., and Ardmore, Tenn. There’s only one Ardmore, its residents will tell you, but that homey hamlet has two separate mayors and straddles a state line where sports betting and the lottery are only legal on one side.

“There’s a small section right off the first exit with a retail area with some gas stations and stuff,” said DiRienzo, referring to the area around Tennessee’s State Route 7. “That area is highly trafficked with players from Alabama. In the same time period (since the start of the NFL season), we’ve had 27,000 geolocation transactions from close to 500 unique players.”

This behavior, it seems, occurs far more discreetly in Ardmore than on those bikes above the Hudson. TN Bets reached out to several businesses on the Tennessee side of the line, among them Piggly Wiggly and True Discount Lotto Land, and none of the clerks said they’d noticed an influx of mobile sports bettors from Alabama conspicuously congregating in their produce sections or parking lots.

Yolandia Eubanks, director of the Greater Ardmore Chamber of Commerce, echoed this sentiment, adding, “All I know is they buy lottery tickets in Tennessee.”