No. 13 Tennessee will need to rebound well to take down a quality foe on a neutral floor 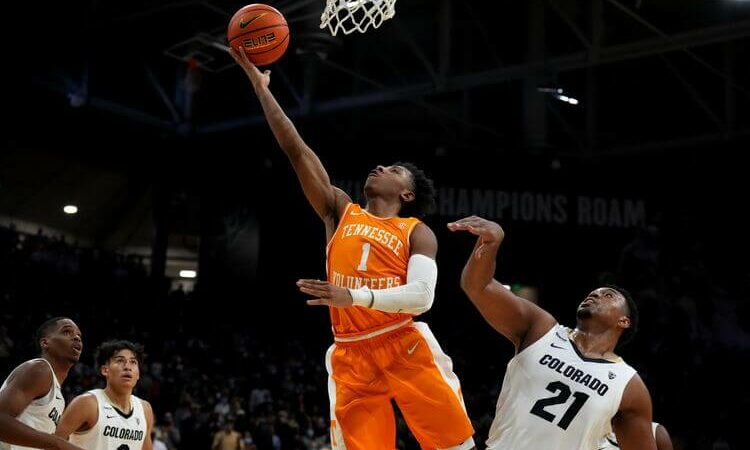 No. 13 Tennessee travels to one of basketball’s premier destinations Tuesday night to take part in the Jimmy V Classic.

The Volunteers, fresh off a 15-point road win at Colorado over the weekend, will face Texas Tech in Madison Square Garden on Tuesday at 6 p.m. CT. The matchup will air on ESPN, and on paper there’s a strong case that it’s the game of the day. It’s this week’s only weekday game featuring two top-20 KenPom teams.

Bettors can find the Tennessee moneyline at anywhere from -165 to -200. DraftKings lists the Volunteers at -165. FanDuel has Tennessee at -184, while TwinSpires isn’t far off with -186. BetMGM lists Tennessee at -200.

Texas Tech boasts a 6-1 record, but it has only faced one top-50 KenPom team, Providence, and the Red Raiders lost by four points on the road. In six games against inferior foes, however, Texas Tech has dominated.

Entering Monday, Texas Tech ranks fourth nationally in scoring margin, outscoring opponents by an average of 26 per game. All six of the team’s wins have come by at least 15 points.

Rebounding is a team-wide effort for Texas Tech, as the Red Raiders have five players averaging at least four rebounds per game, but nobody on the roster records more than 5.8 rebounds per game.

Texas Tech’s defense is also one of the country’s best. The group is aggressive, forcing 19.3 turnovers per game, the 11th best mark in college basketball.

Each team in this matchup plays quality defense. The total is around 140 points at most sportsbooks. FanDuel and WynnBET have the total at 139, DraftKings and TwinSpires have 139.5, Caesars has 140, and BetMGM is a shade higher at 140.5.

While each team excels defensively, don’t discount either team’s offense. Texas Tech has four players shooting better than 40% from beyond the 3-point line.

One of those 3-point weapons is Kevin Obanor. The Oral Roberts transfer looks stellar, and he’s scored 32 points in his last 41 minutes of game action. Tennessee will need to slow down the 6-foot-8 forward with impressive shooting touch.

Vols among the nation’s best on both ends

Rick Barnes’ team is playing well to open this season. Tennessee (6-1) has notable wins over Colorado and North Carolina, and the team’s lone loss came to Villanova. The Volunteers are the nation’s third-most efficient defensive team, according to KenPom, and the offense isn’t far behind.

Five-star freshman Kennedy Chandler looks the part of a future NBA player. He leads Tennessee in scoring (16.1 points per game), assists (33), and steals (17). Despite only standing 6 feet tall, Chandler is adept at scoring in the paint. He’s explosive and shoots the 3-pointer well.

Kennedy Chandler is an NBA guard wearing a Tennessee jersey. This young man is ridiculous.

In the team’s 69-54 road win at Colorado, Chandler led all scorers with 27 points. Nobody else on either team scored more than 13.