TN Sportsbooks Don’t Tab Young Grizzlies As A Contender, But Still Many Ways To Bet On Them

In first NBA season with TN sports betting, the Grizz are expected to take a small step backward

The “bubble” in Orlando was designed to protect NBA players from COVID-19, and it did so effectively. It could not protect the Memphis Grizzlies, however, from a frustrating end to a previously promising season.

The young team was one of the most delightful surprises of the pre-shutdown portion of the campaign, riding Rookie of the Year Ja Morant’s athleticism and creativity to a 32-33 record. Then came the 4½-month break, a torn left meniscus for power forward Jaren Jackson Jr., a 2-6 record in the bubble, and a nailbiter 126-122 loss to Portland in the play-in game.

You might think hopes would be high when the Grizz tip off their 2020-21 season against San Antonio on Wednesday, with the 21-year-old Morant, 21-year-old Jackson, 22-year-old De’Anthony Melton, 24-year-old Dillon Brooks, 24-year-old Justice Winslow, and 24-year-old Brandon Clarke all likely to improve. Throw in veteran 28-year-old center Jonas Valanciunas to anchor a roster where every notable contributor is in his 20s, and there’s nowhere to go but up, right?

Perhaps if Jackson and Winslow weren’t both missing the start of the season due to injury, that would be the case.

Instead, in the first NBA season since legal mobile sports betting came to Tennessee, the Grizzlies are expected to take a small step backward — at least according to the bookmakers.

Bearish on Grizzlies for major success

Unsurprisingly, Memphis is not viewed as a serious contender to win the NBA title, the Western Conference, or even the Southwest Division.

The odds on the Grizz to raise the Larry O’Brien Trophy are as high as 150/1 at both BetMGM and DraftKings Sportsbook. (Local online book TN Action 247 has some very strange pricing, including +14900 on the team’s title odds, which looks like a nice deal if you’re buying a car but is actually the opposite of financial savings for a sports bettor.)

To win the West, again DK and BetMGM have the highest odds, 80/1. DraftKings reports that, nationally, the team is attracting just 1% of the bets and 1% of the handle for Western Conference futures (the LA Lakers are drawing the most bets and the Dallas Mavericks the most handle). Even among DraftKings bettors in Tennessee, the Grizzlies rank only fourth in handle at those juicy +8000 odds: 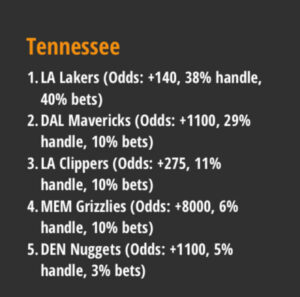 Dallas is favored at all books to win the Southwest Division (from -185 odds at BetMGM to -225 at DraftKings), while the Grizzlies are a longshot, priced as high as +1400 at BetMGM.

Realistically, most of those wagers on the Grizzlies are lottery plays, risking (and almost certainly losing) a small amount of money for a big score.

The way to bet on the team with a better chance of winning is to isolate its over/under on regular-season wins or its yes/no on making the playoffs.

DraftKings, however, is taking a different approach to this shortened season. Rather than having to void all bets if, say, only 68 games are played due to COVID-related cancellations, DK is setting win percentage over-unders, and has the Grizz at 40.5%. That equates to the line effectively being 29.5 wins over a 72-game season. The over is priced at -121 (the under is +100), but still, it opens up an opportunity to try for a “middle.” Bettors who take the over at DraftKings at -121 and the under at FanDuel at +104 can win both bets if Memphis finishes 30-42 or 31-41.

The playoffs have an unusual format this year (and perhaps going forward). Instead of the top eight teams from each conference qualifying, the top six will get in, while No. 7 plays No. 10 and No. 8 plays No. 9 in a play-in round. The superior seeds (7 and 8) will only have to win one game to advance, whereas the inferior seeds would need to win twice in a row.

FanDuel is offering interesting odds on Memphis to be one of the four play-in teams in the West, paying +150 if they finish with anywhere between the seventh and 10th best record. As for actually making the playoffs (defined as one of the teams still standing after the play-in round), the best “yes” price on the Grizzlies is +185 at either TN Action 247 or BetMGM. If you’re not a believer and want to short the local team, the lowest price is -225 at DraftKings and BetMGM.

And if you really want to bet against the Grizz, BetMGM has them priced at 50/1 to finish the season with the most losses in the NBA.

Not sure what to make of the Grizzlies as a team this season, especially with Winslow and Jackson out for a stretch? You can take aim at some player props instead. Here are the best prices in Tennessee on the various options:

Eric is a veteran writer, editor, and podcaster in the sports and gaming industries. He was the editor-in-chief of the poker magazine All In for nearly a decade, is the author of the book The Moneymaker Effect, and has contributed to such outlets as ESPN.com, Grantland.com, and Playboy.

Eric is a veteran writer, editor, and podcaster in the sports and gaming industries. He was the editor-in-chief of the poker magazine All In for nearly a decade, is the author of the book The Moneymaker Effect, and has contributed to such outlets as ESPN.com, Grantland.com, and Playboy.