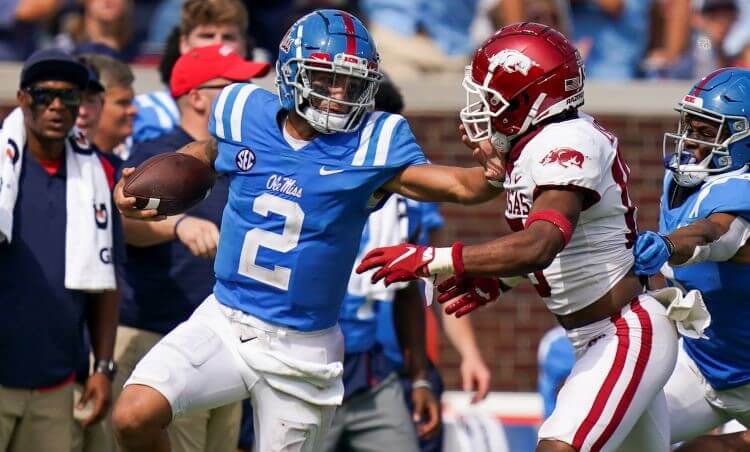 Buckle your seatbelts, fans of high-scoring SEC football. Tennessee hosts No. 13 Ole Miss in a sold-out Neyland Stadium Saturday night for one of the Vols’ biggest games in years, and it’s expected to be full of fireworks in each end zone.

The state’s legal online sportsbooks have set a points total over/under as high as 82.5 for the contest. For some context, no other game on this week’s college football slate has a points total reaching even 70.

While Tennessee (4-2, 2-1 SEC) is a small underdog, impressive back-to-back wins by first-year coach Josh Heupel’s squad has the game looking more evenly matched than might have been the case a month ago.

It will be Lane Kiffin’s first return as a head coach to Knoxville since his 2009 season on the Tennessee sideline. His Rebels, led by Heisman Trophy candidate Matt Corral, had one of the many wild finishes, a 52-51 win over Arkansas, in last Saturday’s nationally televised NCAA games.

Evidently, oddsmakers would not be shocked to see a similar score at Neyland Stadium this week, even if the posted points total is somewhat more modest.

Point spread within a field goal

The sportsbooks listed the Volunteers as consistent 2.5-point underdogs for the game as of Thursday morning. FanDuel and DraftKings were both offering reduced vig of -105 to take Tennessee and the points. The best moneyline payoff showing up was +120, which Caesars joined DraftKings in posting.

DraftKings and BetMGM set the over/under on points at 82, making them a better option for “over” bettors than the 82.5 at other sites. That rather astronomical number, whether 82 or 82.5, comes about because of two up-tempo offenses that have each succeeded in running up and down the field in all but one game this year.

Mississippi has scored at least 43 points in every game except its lone loss, 42-21 to Alabama. Florida was the only team to hold Tennessee to under 34 points, which occurred during the Vols’ 38-14 defeat at the Gators’ hands on Sept. 25.

Under graduate transfer quarterback Hendon Hooker, the offense has looked a lot more potent since that loss. Tennessee jumped out to a 28-0 lead against South Carolina last week, resulting in a 45-20 victory that piggybacked on the 62-24 thrashing of Missouri a week earlier. Hooker threw for 225 yards and ran for 66 against the Gamecocks, while compiling four total touchdowns.

Those numbers, however, actually pale beside Corral’s versus Arkansas: 287 yards passing, 94 yards rushing, also responsible for four TDs overall. Corral’s sensational season has DraftKings currently listing him as a co-favorite for the Heisman at +210 with Alabama’s Bryce Young.

While he’s run a high-powered Ole Miss offense that also steamrolled Louisville, Austin Peay, and Tulane, the Rebels’ defense can be exploited. The visitors to Neyland have been giving up 429 yards per game. In the Vols’ six games, the offense has averaged 474 yards.

So there’s no shortage of stats suggesting this first meeting between the schools since 2014 could be quite memorable, at least for those who enjoy seeing the scoreboard constantly turning numbers.