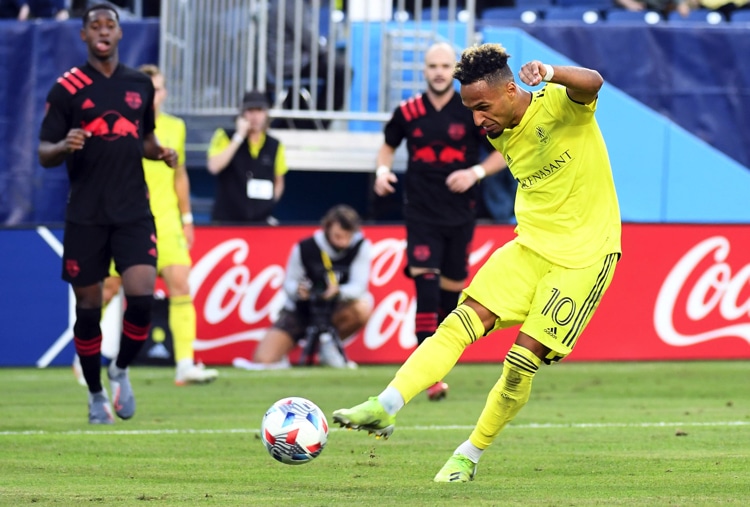 Back in the MLS Cup for the second straight year, Nashville SC looks to make the most of home-pitch advantage Tuesday night when it hosts Orlando City SC in its first top-flight postseason home game in franchise history.

The Six Strings (12-4-18), who reached the quarterfinals last year in their first season in MLS, finished third in the Eastern Conference on 54 points and lost a tiebreaker to the Philadelphia Union that would have provided a bye to the conference semifinals. New England ran away with the top seed and the Supporters’ Shield, finishing 19 points clear of the two teams and another three points better than Orlando City (13-9-12).

With the road to the MLS Cup going through the Revolution, oddsmakers have pegged Nashville SC as a longshot to win the title. Caesars has the shortest listing at +900, with WynnBET and TwinSpires next at +1000 and BetMGM at +1050. Tennessee Action 24/7 is offering +1100, and DraftKings (+1400) and FanDuel (+1600) round out the title offerings. FanDuel also has a listing for the Eastern Conference title, offering the Six Strings at +750 to reach the MLS Cup final.

Since joining MLS in 2020, Nashville SC has lost just twice in 29 regular season matches at Nissan Stadium, recording 13 wins and 14 draws. The Six Strings were the only team not to lose at home this season as they posted eight wins and nine draws with five clean sheets. Nashville SC, though, finished with seven draws in its final nine matches — and two of those stalemates came against Orlando City.

The 1-1 draw in the most recent meeting, on Oct. 31 in Florida, was not without some controversy, as the Lions had a late winner by Darryl Dike disallowed for what many thought was a questionable foul. It has been a rallying point for Orlando City coming into this game, considering the four-point swing contributed to the Six Strings having home-pitch advantage for this contest.

Just getting here was never the goal.

We're Back for More. pic.twitter.com/H0Ld01IVVw

The teams shared the points on all three occasions this season and in four of six matches overall since the rivalry started last year. All three matches at Nissan Stadium have ended in draws, with Orlando City rallying on both occasions this year to salvage a pair of points.

The Six Strings, though, have been installed as solid favorites to win in 90 minutes on the 3-way line, with a tight band ranging from -110 at most sportsbooks to -120, while a draw is being offered as high as +245 at DraftKings.

One play that has a track record of delivering in this series has been both teams scoring; neither side has recorded a shutout in the six meetings. It is a slight plus-money play across the board, with BetMGM (+115) edging out WynnBET (+114) and FanDuel (+112) for top value.

"No player in 2021 was involved in more goals than Hany Mukhtar. The Nashville SC attacking midfielder was involved in 47% of the goals scored by the Tennessee-based club in 2021." https://t.co/FEQnOmQv4X

FanDuel’s listings for anytime goal scorer are notably higher than any other sportsbook for Nashville SC’s top two options, Hany Mukhtar and Charles Sapong. Mukhtar, who finished tied for fifth in the league with 16 goals, can be grabbed at +260 at FanDuel, with TwinSpires a distant second at +170.

Sapong, second to Mukhtar with 12 goals, is listed at +230 at FanDuel, with DraftKings the second-best offer at +180. Those looking beyond that tandem may want to consider midfielder Randall Leal, who had eight goals and nine assists for the Six Strings. While FanDuel is also the best pick here at +320, the low end is still attractive with Caesars and DraftKings both offering +250 for him to bulge the back of the net.

If Nashville SC does advance, it will play at Philadelphia on Sunday afternoon.