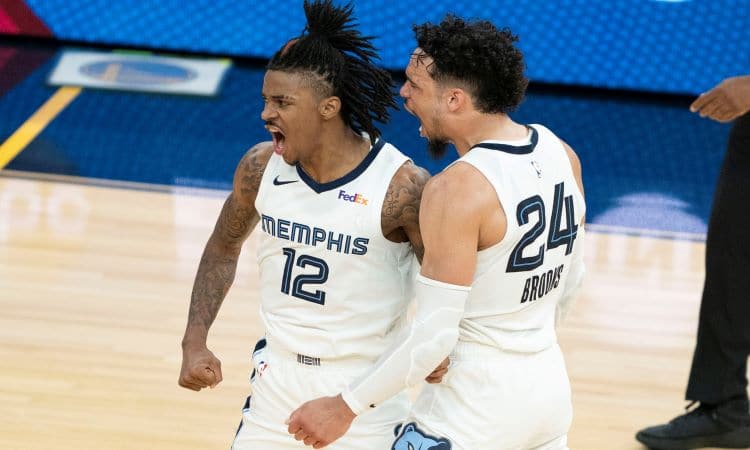 Much has changed in Memphis since the Grizzlies eliminated the Golden State Warriors in a 2021 NBA Western Conference play-in game, thus qualifying for the playoffs for the first time in four seasons.

Although the Grizz bowed out in the first round to the top-seeded Utah Jazz, Memphis still boasts a young, talented core of players poised to return to the postseason for a second consecutive year. But as NBA training camps get underway, top sports betting operators are torn on whether Memphis will replicate the feat. At DraftKings, the over/under for the Grizzlies’ seed in the Western Conference final standings is 8.5, a clear indication that Memphis should return to the play-in round.

Four teams qualify for the play-in round in each conference, with two advancing to the playoffs. The Grizzlies can finish as low as 10th out west and still make it to the play-in stage. There are odds of +110 on the Grizz to make the playoffs, with some juice on Memphis to miss the postseason at -140.

The total on Grizzlies’ regular season wins at DraftKings is 41.5, which is more than the Pelicans, Kings, and Spurs. On the other hand, the Memphis win total is also below the Warriors, Blazers, and Nuggets, three teams expected to be in the middle of the pack in the Western Conference.

In short, the Grizzlies’ playoff chances can be aptly characterized as a dead heat as the team prepares for its regular-season opener on Oct. 20 against the Cavs.

A flurry of offseason trades, but a core remains

The Grizzlies made a flurry of trades in the offseason, while still retaining the core of their roster. In July, Memphis acquired Steven Adams from the Pelicans in a swap of veteran centers, with New Orleans receiving Jonas Valančiūnas in exchange. The Grizzlies also received Eric Bledsoe, who was quickly shipped to the Los Angeles Clippers for three players. In continuing the frenetic narrative that summed up the Grizzlies’ offseason, Memphis jettisoned all three players, most notably guard Patrick Beverly.

Memphis landed several other key additions in swingman Jarrett Culver from Minnesota and guard Kris Dunn from Atlanta. Culver, the No. 6 overall pick in the 2019 NBA Draft, is widely considered to be the top bust from that draft class. Last season, Culver averaged only 5.3 points per game, marking the second straight year that the former Texas Tech standout averaged single digits for the season. A change of scenery could help Culver resurrect his career. Memphis also traded sharpshooting guard Grayson Allen to Milwaukee for guard Sam Merrill and two future second-round picks. Allen averaged 10.6 ppg in 2020-21.

Still, the Grizz return four of their top five scorers, led by point guard Ja Morant, the 2020 NBA Rookie of the Year. Morant followed up his stellar rookie campaign with an impressive encore, averaging 19.1 ppg and 7.4 apg and ending the season as one of only eight NBA players to average at least 19 points and seven assists per contest. Morant torched the Warriors with 35 points and six assists in the 117-112 overtime play-in win, arguably outplaying Steph Curry down the stretch.

Curry also vanished in the 4th and OT, Ja owned him pic.twitter.com/D0asMo59C1

Morant has odds of 35/1 to lead the NBA in assists, the eighth-lowest odds at DraftKings. The futures market is led by James Harden (-120), followed by Russell Westbrook (+200), Trae Young (+400), and Luka Dončić (+600). Morant is a longshot to win NBA Regular Season MVP, with odds of 45/1. Memphis forward Jaren Jackson also has odds of 15/1 to be the NBA’s Most Improved Player, the sixth choice at DraftKings.

Ahead of next week’s preseason opener against the Hawks, a handful of top Grizzlies players confirmed that they are fully vaccinated for COVID-19. Kyle Anderson and Desmond Bane joined Morant, Adams, and Jackson among a list of players who have met NBA standards by becoming fully vaccinated. Another potential starter, Dillon Brooks, was non-committal when asked if he has been vaccinated.

Memphis general manager Zack Kleiman indicated earlier this week that the team is working toward its goal of becoming 100% vaccinated.

Across the league, Nets guard Kyrie Irving and Warriors forward Andrew Wiggins are among a handful of high-profile players who have expressed hesitancy at becoming fully vaccinated. The status of both players could impact season-win totals for the two teams.

Beyond DraftKings, several other books are less than bullish on the Grizzlies. Memphis has odds of 100/1 to win the NBA title at BetMGM. There are odds of 80/1 on a Brooklyn-Memphis matchup in the finals, as well as odds of 250/1 on a Grizzlies-Bucks series to decide the NBA championship.

At FanDuel, the Grizz have odds of 49/1 to win the Western Conference. There are nine teams with a higher probability to win the conference, according to FanDuel, indicating that Memphis may need to grind again to make the playoffs.