If the Grizzlies' PG can build off a stellar postseason, he has a shot to win multiple honors 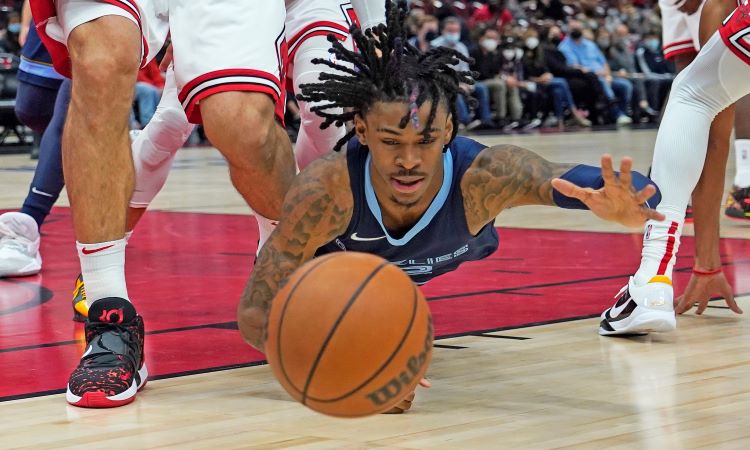 Over the summer, Ja Morant went mano a mano with Leonard Fournette, racing the Tampa Bay Buccaneers running back on a treadmill that was ratcheted up to near-max speed.

The intense workouts have paid dividends for the newly chiseled Fournette, who has added an element of elusiveness to his power running style. Now, as the Memphis Grizzlies’ regular season begins, the team brass is optimistic that Morant’s punishing offseason regimen could lead to further improvements for the talented point guard.

At FanDuel, Morant has odds of 14/1 to win the NBA’s Most Improved Player award, fourth-best on the futures board as of Wednesday morning. Morant trails only Nuggets forward Michael Porter Jr. and Warriors guard Jordan Poole, both at 10/1, as well as Rockets guard Kevin Porter Jr. (12/1) in the category. Last season, Morant averaged 19.1 points and 7.4 assists per game in his second season in the league.

As the season approaches, Morant’s teammate Jaren Jackson Jr. (so many juniors!) openly questioned if the guard should even receive inclusion on the Most Improved list. Speaking Monday with SiriusXM NBA Radio, Jackson joked that Morant can’t get much better after he led the Grizz to their first playoff spot in four seasons this past spring.

First, Morant arguably outplayed Steph Curry down the stretch when Memphis outlasted Golden State 117-112 in the Western Conference play-in tournament. Morant finished with 35 points and six assists as the underdog Grizzlies ended the Warriors’ season. Morant then followed up the effort by averaging 30.2 ppg in the conference quarterfinals against the top-seeded Jazz, a series won by Utah in five hard-fought games.

You heard him! @KendrickPerkins chose @JaMorant to win this season’s MOST IMPROVED PLAYER and added that he will be a first-time ALL STAR this year! #NBAToday pic.twitter.com/IrEGFQknS0

According to projections from Basketball Reference, Morant will average 21.3 ppg on 47.1% from the field along with 8.2 apg this season. Morant shot 44.9% from the field last season, down from a field goal percentage of 47.1 in his rookie campaign of 2019-20. While Morant has odds of 35/1 at DraftKings to lead the league in assists, he’s still considered a longshot to win that crown. The top two players in assists last season, Russell Westbrook and James Harden, both averaged more than 10 per game.

Jackson is a candidate to win Most Improved Player honors, with odds of 16/1 to win the award at DraftKings, ahead of Morant at 25/1. Tennessee sports bettors who plan to take a shot on the hometown favorites may be somewhat surprised to see such high odds on Morant. Given the favoritism for Morant at FanDuel, there is value to be had on the Memphis guard at any book with odds above 20/1.

Memphis opened at 42.5 wins on the season-win totals market, a figure that dropped to 41.5 wins by preseason training camp. As of Wednesday morning, the season-win total on the Grizz remained at 41.5 at DraftKings. There is some juice on the over at -120, with the under at +100.

this year: all #grizzlies media is saying SMASH the over. result:??

At 42-40, Memphis would finish the regular season with a .513 winning percentage. The Warriors finished eighth in the West last season at 39-33 for a winning percentage of .542. This season, the NBA is going back to an 82-game regular season for the first time since 2018-19. At DraftKings, the Grizzlies have odds of +110 to make the playoffs , with odds of -140 to not qualify for the postseason.