Is Mattress Mack Good For Gambling?

Unlike most sports bettors, Houston's highest roller lets folks know when he loses 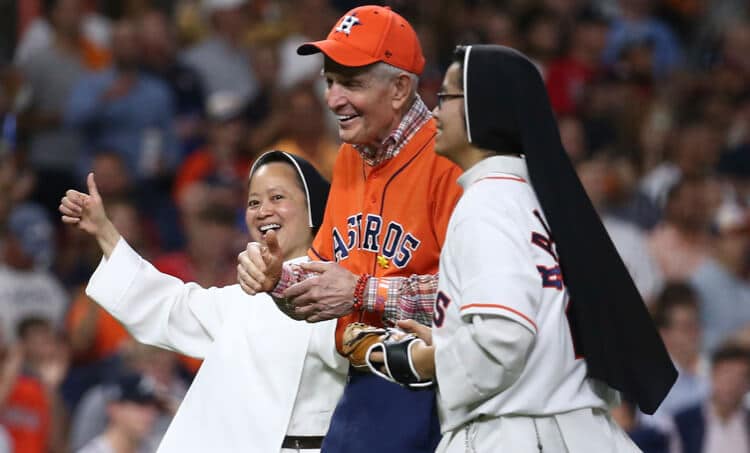 “‘Mattress Mack’ loses $4.7M in 6 days betting football,” the bold type read. And then, in tinier type: “After cashing his tickets on the Buccaneers (he won $3.7 million on Tampa Bay in last year’s Super Bowl), Mack has lost a total of $12.1 million in wagers: $1 million on Houston to win the NCAA [men’s basketball] title, $2.4 million on Essential Quality to win the Kentucky Derby, $4 million on the Astros to win the World Series, and the $4.7 million in bets on Alabama [to win college football’s national championship] and the Patriots [to win this year’s Super Bowl].”

And that was before he lost $1.7 million in futures bets on the Titans to win the Super Bowl this past weekend, by virtue of top-seeded Tennessee’s loss to the underdog Bengals in the divisional playoffs.

But if you think Mattress Mack’s seemingly epic losing streak has given him pause when it comes to placing his next million-dollar wager, think again.

“A gambler has to be resilient, if anything,” McIngvale told the Review-Journal. “They knock you down and you’ve got to get back up. A setback is just a setup for a comeback.”

In fairness, McIngvale told TN Bets that the Titans’ loss “kind of knocked me out.” But in the next breath, he said, “I’ll see what happens in the next few days and see what the injury report says” before betting on this coming weekend’s NFL games.

McIngvale, who says he’s “got almost everything hedged,” may have erroneously picked Tennessee to win the Super Bowl, but he recouped $1 million by taking the Bengals to beat the spread in their playoff matchup with the Titans.

“My friend, who’s a football savant, thought for sure it was going to be a very close game and I thought for sure the Titans were gonna win,” said Mack. “So he was right and I was wrong, but it worked out.”

As for that big ‘Bama bet, he hedged it with a furniture promotion wherein if a customer bought a mattress for $3,000 or more and the Crimson Tide won, they’d get their money back. That form of one-step-removed sports betting — a necessary distance in Texas, which has yet to legalize wagering on athletic competitions — failed to cash for his customers, which was good news for the house (i.e., McIngvale, who typically flies to Colorado to get money down).

McIngvale wound up partially patching the holes in his losing customers’ pockets by giving them each $1,000 gift certificates. And even though he lost $6.2 million betting on the Tide, he said he “still made money on the promotion.”

“It was hard for even me to believe,” he said of the net-positive result.

But are Mattress Mack’s very publicly disclosed results a net positive for sports betting at large and the responsible gambling community in particular?

“‘A setback is just a setup for a comeback’ — that might be true for him and his behaviors, but certainly not for most folks,” said responsible gambling consultant Brianne Doura-Schawohl. “And it gives this false impression [that] it will give him a big win the next time, which isn’t a sure thing. In a way, it’s being glamorized, like ‘go big or go home,’ ‘can’t win big if you don’t bet big,’ and the like.

“Young, impressionable folks may see a real allure and excitement — as he even articulates — with these magnanimous-sized bets, and that’s risky,” she said. “You shouldn’t need excessive [risk] to gain enjoyment. Truthfully, it’s behaviors and instances like this that solidify my stance that we just need to be educating the public more and better — in general — around gambling, sports wagering, and problem gambling.”

Taking a more optimistic tack, National Council on Problem Gambling Executive Director Keith Whyte told TN Bets, “The amount of the money you lose is just one factor. As or even more important, it’s why and how you gamble. So if he can afford it and feels all this publicity is somehow beneficial, and if his gambling is not causing harm to his personal, financial, and emotional health, then hopefully he is just a very public, very heavy recreational gambler.

“The impact his high profile has on other gamblers is probably mixed,” Whyte continued. “Some are going to see those losses as a cautionary tale, and others may try to emulate him. There is also likely an anchoring effect where when people hear those big numbers, that creates a mental anchor and it may make smaller bets seem inadequate or even abnormal, and/or make bets of his size seem more common or frequent than they are, even though he is likely an outlier by several orders of magnitude.”

As Whyte went on to note, most high-profile — and low-profile, for that matter — bettors like to keep their wagering a secret, especially when they lose.

“I think one of the distinctions is that Billy Walters and [Michael] Jordan and everyone else didn’t want their sports bets to be known, and Mack does. He publicizes it,” said Whyte. “He lives in a Twitter age and whether or not he’s trying to move the line, I don’t know. That’s one of the things that’s new. There have always been these big sports bettors we’ve heard about, but not so publicly.”

And by being so transparent about his losing wagers, this particular whale might be doing the guppies — particularly those in danger of swimming into a sea of addiction — a favor.

“Most people talk about their wins and not their losses,” Whyte said. “The more selective a recall you have, the more likely it is that you have a gambling problem. People with gambling problems are more likely to minimize their losses. By normalizing the fact that he loses big a lot, that might scare off some gamblers who think that sports betting’s a sure win.

“There’s something kind of refreshing about [Mack] putting it all out there,” Whyte added. “He’s further proof that traditional American moral attitudes toward gambling are rapidly changing. Within that normalization of gambling is an opportunity to have an honest conversation about the costs and benefits without the weight and baggage of people seeing it as a moral or religious issue. Social mores have been changing rapidly on gambling, to where even religious opposition to gambling is eroding.”

Case in point: Mattress Mack’s own Twitter feed, which pits Bible verses against news of his gambling exploits, with the “over” promising Heaven and the “under” a harder dimension to peg.