If Henry Returns, Titans’ Postseason Odds Could Be Halved 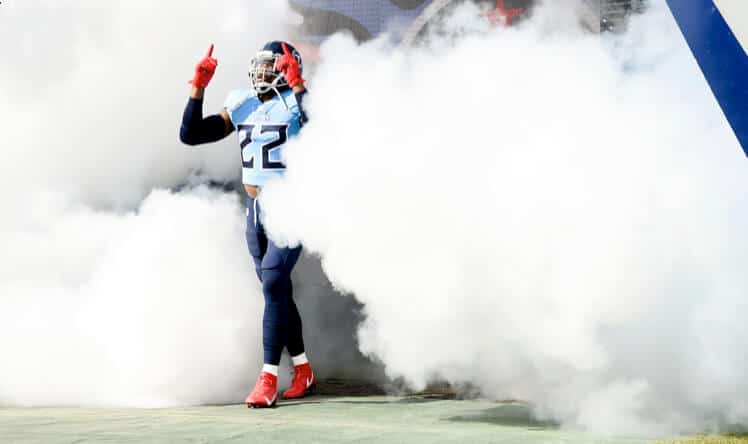 Until Derrick Henry suffered a potentially season-ending foot injury during a Halloween victory over the division rival Indianapolis Colts that elevated Tennessee’s record to 6-2, the Titans were considered legitimate Super Bowl contenders. Since Henry broke his foot, however, they’ve gone 2-2, with all of Tennessee’s mobile sportsbooks believing the Titans will still make the playoffs but stand little chance of hoisting the Lombardi Trophy come Feb. 13.

With a two-game lead over Indy and possession of the tiebreaker against that club, the Titans — currently enjoying a bye week before hosting the lowly Jaguars on Dec. 12 — are, unsurprisingly, heavy favorites to win the AFC South, with odds ranging from -2500 at DraftKings to -1200 at Caesars and FanDuel. But while BetMGM has the Titans at +350 to finish with the best record in the AFC, second only to the Ravens (+250), their 9/1 odds to represent the conference in the Super Bowl lag behind those of the Chiefs, Ravens, Bills, and Patriots among AFC franchises. Of all the sportsbooks, BetMGM gives the Titans the best chance of winning the Super Bowl at 20/1, while DraftKings is the most pessimistic book at 28/1.

But what if, as some suspect, Henry is able to return to the backfield in time for the playoffs? What would that do to the Titans’ postseason odds?

“Immediately, you’d have to cut them almost in half,” WynnBET trader Sawyer Johnson told TN Bets. “They’re two completely different teams. With him, they’re a contender with maybe eight or so other teams, but they’re nowhere near an elite team without him.”

Henry ‘more than just a player’

While quarterback Ryan Tannehill has been the portrait of health and resilience behind center this season, the Titans’ receiving corps has existed in a seemingly permanent state of depletion, with star wideouts A.J. Brown and Julio Jones banged up to the point where they’ve shared the field infrequently this season.

That’s significant. But still, it all comes back to Henry’s health.

“Obviously, A.J. Brown and Julio Jones are some of the best of the best, but Derrick Henry is more than just a player. He’s the identity of this team,” said Johnson “[The Titans are] gritty, they’re physical, they want to hurt you, they don’t want to win pretty. They want to make you wake up feeling like crap. [Henry] is the Tennessee Titans.

“A.J. Brown, he’s a phenomenal receiver, but one of the things that makes him great is his after-the-catch ability,” Johnson added. “The slant and the dig, a lot of the times those routes work is, with Derrick Henry, it forces the linebackers to react to the run, which opens up a little window behind them for that slant to be completed, for A.J. Brown to be a better version of himself. I think Derrick Henry makes other players better.”

For what it’s worth, count Johnson among those who believes Henry will put on the pads again this year.

“I am optimistic, with no reason other than my personal feeling,” said Johnson. “He is just a freak of nature. You just have to look at him, how fast he can run at his size. You’ve got to think someone like that has a better chance coming back from injury [than a mere mortal].”