Memphis has been on a tear this season, positioning itself for a top playoff seed 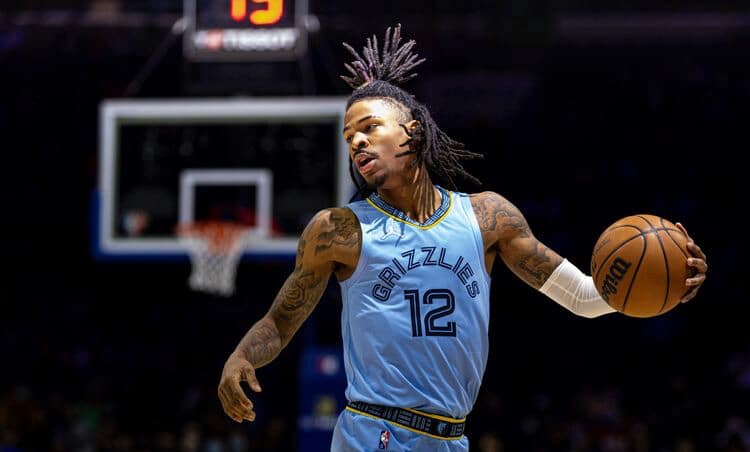 The Grizzlies hit the road Wednesday night, traveling to New York to face the Knicks in Madison Square Garden, one of basketball’s premier destinations. Memphis and New York will receive national attention, with the game airing on ESPN at 6:30 p.m. CT.

Ja Morant and company enter the matchup as road favorites, as they’ve developed into one of the NBA’s top teams while the Knicks have floundered in the Eastern Conference. BetMGM, FanDuel, DraftKings, and WynnBET all have the Grizzlies as 3.5-point favorites entering the nationally televised contest, while TwinSpires lists Memphis as a 4-point favorite.

Memphis’ moneyline ranges from -160 to -168 at most major Tennessee sportsbooks, with DraftKings listing Memphis at -160 and FanDuel going up to -168.

Every win matters for the Knicks in the coming weeks, given their playoff standing. After earning the No. 4 seed in the Eastern Conference last season, the Knicks haven’t seen the same level of success this year. New York sits just outside the playoff picture, trailing the Atlanta Hawks by half a game for the No. 10 seed.

According to an efficiency metric from ESPN, the Knicks are tied for ninth in the NBA in defensive efficiency. It’s the team’s offense that isn’t playing as well, with the group ranking 22nd in efficiency.

Last season seemed to reinvigorate the Knicks’ fan base, but this year, the team seems average. They’re not a bottom dweller likely to win the NBA lottery, but they’re also a far cry from being an Eastern Conference contender.

That makes the Knicks an interesting team to track ahead of the Feb. 10 trade deadline. Could Julius Randle, the team’s leading scorer, be headed elsewhere? Will any moves open up playing time for former lottery pick Cam Reddish, who has barely seen action since joining the team? How does RJ Barrett fit into the team’s future?

DraftKings offers boosted odds (+450) on both Morant and Barrett to score 25 or more points Wednesday night. Be careful taking that boost, however, as Barrett has reached 25 points just once in his previous eight games.

EVERY Ja Morant dunk this season, in order pic.twitter.com/RHP5IaPBv6

There’s plenty of reason to like Memphis on Wednesday night, as the Grizzlies are among the NBA’s most profitable teams this season, going 34-20 against the spread in their 54 games. Memphis is exceptional against the spread on the road, covering in 17 of its 26 road contests, while the Knicks aren’t all that dynamic at home, going 13-14 ATS at MSG this year.

Memphis enters the matchup after a stellar January in which it won 12 of its 16 games, including its first seven games to start the new year. The Grizzlies currently sit in third place in the Western Conference with a four-game buffer between them and fourth-seeded Utah Jazz. While earning the top seed in the conference is unlikely – Memphis trails Phoenix by 7.5 games – the Grizzlies are still one of the NBA’s most productive teams.

A win over the Knicks would help Memphis start February on the right foot, while giving one of the NBA’s most exciting young squads a chance to shine on national TV.